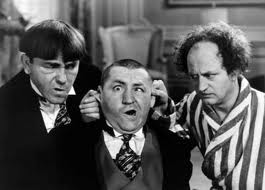 Clearly television is a big part of our family's life, given the fact that my husband works in the industry...as does pretty much everyone else we know.  Recently, we thought it would be nice to expose our boys to some TV oldies (but goodies) and started with the Three Stooges.  (Yes, I do know that the Three Stooges isn't technically a tv show, but short film.)

We weren't sure what the boys would think of the show.  Up until we showed it to them for the first time last week, my three-year-old assumed that anything in black and white was scary.  Long story short...they love the Three Stooges.  In fact, it's pretty much all they want to talk about.  At first we thought it was so fantastic that something with such history could be so meaningful and entertaining today.  That was until we realized that not only did they love to watch the Three Stooges, but they wanted to recreate the Three Stooges.  The show winds them up and puts them on a crash course set for disaster!  I have never in my life seen anything wind two little boys up more!

We've had to set parameters on Three Stooges view: never before bedtime and everyone has to stay seated...or at least wear padding and a helmet.  :)
Posted by Unknown at 10:43 AM 1 comment:

This Christmas season seems to be flying by and now that the kids are out of school for winter break, a little extra TV time may be on tap for your family.  Over on the ABC Family channel, Disney is ceebrating the 25 days of Christmas with lots of special programming throughout the day, everyday through Christmas.  The programming consists of Christmas-themed specials and holiday-themed and family-favorite movies.  Some of my favorites include Toy Story Saturday night at 8p.m., Winnie the Pooh and Christmas Too on Monday at 6:30, Miracle of 34th Street on Tuesday at 6, The Santa Claus on Thursday at 6:30, and Mickey's Christmas Special on Christmas Eve at 5.  Stop by ABC Family and check out the family-friendly special holiday entertainment lineup!
Posted by Unknown at 7:22 PM No comments:

PBS KIDS is always looking for ways to innovate and produce quality educational programming and apps for kids.  Keeping with that tradition, PBS KIDS has launched its newest app at the iTunes App Store - DINOSAUR TRAIN Eggspress!  The app, based on the hit TV series DINOSAUR TRAIN from the Jim Henson Company, promotes science and math skills for pre-schoolers while guiding children through three prehistoric eras and various exciting games including a Dinosaur egg hunt. This app joins a suite of popular PBS KIDS educational & innovative apps including SUPER WHY! & MARTHA SPEAKS Dog Party.

A Special Look at the NBC Show, Minute To Win It

As The Television Mom, I really do LIVE life in the world of television.  My hubby is the supervising producer of the NBC primetime game show, Minute To Win It.  He has been working on the show since its inception and I am so proud of how hard he works on the show.  Here a few of my family's favorite memories at the show.

Email ThisBlogThis!Share to TwitterShare to FacebookShare to Pinterest
Labels: behind the scenes, minute to win it

If you are looking for some great holiday entertainment for your kids, look no further than your local PBS station with these great PBS Kids shows.


DINOSAUR TRAIN – “Dinosaurs in the Snow”
Buddy and his Pteranodon family ride the Dinosaur Train to the North Pole - where it's cooler out and the skies are dark all winter long! The kids get to play in the snow and slide on a frozen pond for the first time.  This show will premiere on December 14.

CURIOUS GEORGE: A VERY MONKEY CHRISTMAS
Curious George and The Man with the Yellow Hat are having a wonderful time getting ready for Christmas. There's only one dilemma - neither of them can figure out what to give the other for a present! In the end, both gift-giving predicaments are simply and beautifully resolved, revealing the true spirit of the holiday season.

SUPER WHY! – “The Nutcracker”
Princess Pea doesn't know what to do about her friend Sleeping Beauty who is very, very grumpy!  Super Why and his friends dance their way into the story of The Nutcracker, accompanied by Tchaikovsky's memorable music, to find out why the Mouse King is so cranky and give an innovative twist to the holiday classic.  But will the super readers be able to restore magic to The Land of Sweets?

BARNEY & FRIENDS – “Gift of the Dinos and A Visit to Santa”
Gift of the Dinos -- It's Christmas and BJ dreams of getting a new baseball glove to go with his baseball, while Riff hopes for new drumsticks to use his drum.  Barney reminds them that Christmas is more than just getting gifts and helps them learn the meaning of Christmas.

A Visit to Santa -- Melanie spends so much time helping her friends at Christmas that she is late writing her own letter to Santa.  Barney takes her on a trip to the North Pole to deliver the letter in person.

CAILLOU – “Caillou’s Christmas”
Caillou goes out caroling for the very first time with Mommy, Daddy, Rosie, Grandpa and Grandma. He finds out caroling is lots of fun - you get to stay up late and surprise your friends with carols, and you even get treats! They finish up the night with a big finale at the seniors' home and Caillou imagines he's really 'dashing through the snow' in a horse and sleigh.

WORDWORLD – “The Christmas Star / A Christmas Present for Dog”
The Christmas Star -- It's the night before Christmas and Frog needs a star to hang on his Christmas tree.  Duck thinks this will be the perfect present for Frog, and tries to lasso one out of the sky for him.  Try as he might, Duck is unable to catch a star for Frog, and cries himself to sleep. But while he sleeps, someone leaves him a wonderful present: the letters S-T-A-R…

A Christmas Present for Dog -- It's Christmas morning, and all the WordFriends are excited by the presents Santa has brought for them!  Pig has a sled, Bear has a doll and Ant has a cookie.  But not all the letters for Dog's present came down his chimney.  All he has is a B-A-L.  Bear gets filled with the Christmas spirit and makes a sacrifice to ensure Dog's Christmas will be merry!
Posted by Unknown at 5:11 PM

Email ThisBlogThis!Share to TwitterShare to FacebookShare to Pinterest
Labels: holiday 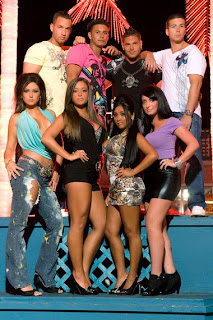 I like bad television. I'll admit it. I often watch it in private, too embarrassed to expose my love for watching morons at their worst. There's a new show that I not only cannot believe has been made, but I am so excited to see...Jersey Shore on MTV.
I should preface this that even at my advanced age (somewhere in the abyss of my 30s), I'm still a fan of MTV. There's a lot of junk on MTV, but then I think there's a lot of redeeming real-life television shot documentary style that entertain and educates young people and old people like me on trends in the lives of young people. I love the True Life series, as it seeks to expose the real lives of teens and young people with all sorts of life conditions--from dealing with adoption to drug use to interracial dating--all of which dealt with in an nonglamorous manner, gritty, and well...real. Coming soon on MTV is a series on teen moms that shows the bad and ugly of being a 16 year-old mother. This is a show that I hope serves as birth control for many, many years. I feel like these shows that do not glamourize but show the grit and reality of life are a service to young people as they make life decision and informative to old folks like me as we parent our children.
Now back to Jersey Shore. Being a California girl, born and raised, it is often hard for me to understand the Jersey lifestyle, clothes, and the like. The tanning, the over-buff and clearly 'roided out dudes, the dramatic and over made-up gals--it's all so intriguing to me because it's not even remotely close to my life. If you haven't seen a clip or trailer for this show, check out the clip below. The entire thing has my jaw on the ground. I love a train wreck and won't be able to divert my eyes from this spectacle.
MTV Shows
Yes, yes, I know what you are saying. It looks like just one more crap television show. So maybe it is. You are probably saying that this show can't be real. Well, as the wife of a television producer, I can tell you this. No one can "edit" you to look bad...not even the best editor. The producers and editors will string together your most interesting and colorful moments and that's the participants doing .
As an armchair sociologist and a woman obsessed with learning about the lives of others so very different than my own, I will be setting my DVR to watch this show. I cannot wait to see the drama, the hairspray, the tanning sessions, and the nights at the club. I can't wait to hear that awesome Jersey accent and be thankful to have been raised in the golden state.
Posted by Unknown at 8:09 AM 2 comments: 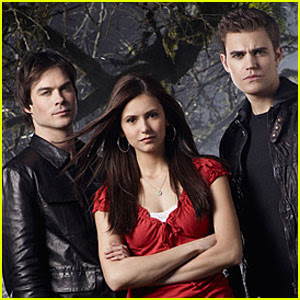 I'm not certain if this is something I should admit publicly, but I have never read any of the Twilight books and haven't seen the movies. I really didn't see the appeal of the vampire stories. (Please don't hate me Twilight fans!) I mean, could vampires be appealing or interesting or have depth of character?
When the Vampire Diaries premiered on the CW, my husband was excited at the idea of a vampire show on every week. I mocked him and told him he was ridiculous. So...then I watched the Vampire Diaries. I watched the first and second episodes with him. He lost interest and I...became obsessed. I love this show! It is awesome--compelling, hot guys (too young for me, of course), smart dialog, good acting, and interesting twists and turns in the story lines. I look forward to each week's episode as a "supernatural escape" with vampires and witches mixed with a tragic love story and family tensions.
The great news is that it's not too late to be bitten by the Vampire Diaries. The CW will start a Vampire Diaries marathon on Monday, December 14 that will go through Friday, December 18. Each night, the CW will show two hours of "The Vampire Diaries" per night, in order. This is perfect timing, as if you are new to the Vampire Diaries or missed an episode, the last new episode of 2009 aired this last Thursday, November 19.
Posted by Unknown at 6:57 PM No comments:

About The Television Mom

I'm a mom, a former reading specialist and writer specializing in children's health, development and wellness. One of my most interesting roles is that of wife to a television producer. I'm not afraid to say that I love watching television and being that I'm married to someone in the industry, my perspective on what we watch is...unique. While watching children's programming, I'm always looking for the educational elements and benefits of the programming. As the wife of a television producer, I watch programming for the adults with a critical eye and understanding of the sweat and effort that goes into making a television show--even the small ones.